A village school at the heart of a thriving city

A brief history of Swaythling

The story begins in the late 1890’s – Queen Victoria was still on the throne.

Following the education acts of 1870, 1876 and 1880 there was a real need and demand for education for all children.

As a result of this concern, a meeting was held in Swaythling (then a village on the outskirts of Southampton) “to consider the means to be taken to supply that part of the parish of South Stoneham, called Swaythling, with the proper means of Education”.

The meeting was called by the local vicar, Mr J D Paton and held in the village hall on 12th October 1896. The meeting elected a committee to start planning for a school. From the outset, one of the committee, Miss Covey, offered a plot of land as the site of the school – with one condition; that it should be a Church of England School. This was very normal for the time and was probably not even debated. The offer was accepted. As it transpired, the site offered proved not to be suitable, and in an act of astonishing generosity, Miss Covey paid £375 for a new site.

The proposed school was planned to accommodate 150 children, although it was recognised that growth of the area would mean expansion at a later date. Plans were drawn, and a budget of £1000 put aside for the project.

On the 24th June 1898, Miss Elizabeth Cockroft was appointed as headteacher, on a salary of £75 per year. The school was opened by the Bishop of Winchester on August 31st 1898. At this point the building consisted of a single room and was known as Swaythling Infants’ School (South Stoneham Voluntary Schools), Hampton Park Estate.

The first entry in the school log book on September 1st 1898 reads:

“I Elizabeth Cockroft, commenced my duties today as Headmistress of this school. For the past 18 years I have been Headmistress of Mytholmroyd Board School in Yorkshire. I have admitted 46 children today of whom only 7 have attended school before. They have no idea of school discipline and seem to be backward in nearly everything.” 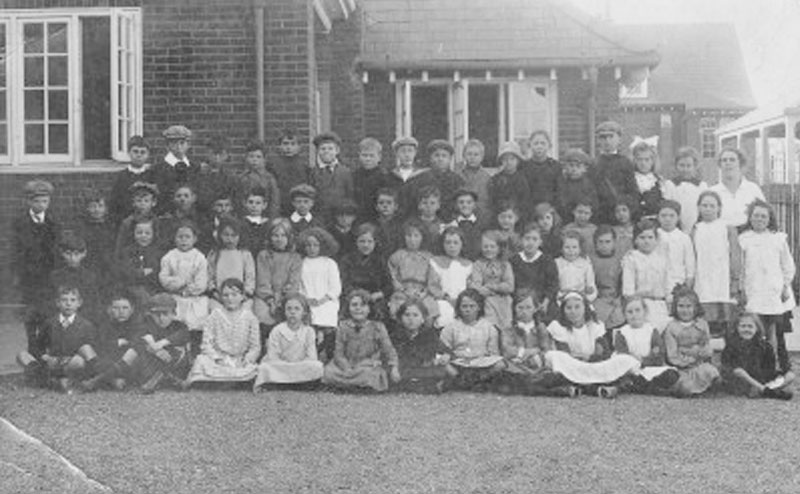 “The managers are to be congratulated on the success of the new school. The rooms are spacious and airy, and there is a liberal supply of equipment. The instruction is careful and excellent order prevails. The addition of a piano would greatly help the school.”

During these early days, the number on roll was around 100 children- many of them had a long way to walk and attendance was poor on wet and windy days. If less than half the children arrived, the school would be closed and the children sent home until the weather improved!This was a time of great change for Southampton, which was growing into a major Atlantic port. The nearby common was used as a play area for the local children, and also played host to a huge transit camp for soldiers going out to fight in the Boer War.

In November 1908, Miss F Higgs took over the headship from Miss Cockroft. During her first year a second school was opened to accommodate the children aged between 7 and 13.

The new school (which is the building that we continue to use today) was known as Swaythling Council School, and unlike the Infants’ School, it was a ‘Public Elementary’ school rather than a church school. It was designed to accommodate 350 children – so the 6 classrooms that we still use today would then have housed 60, rather than 30 children!

Assembly was held every morning. The children lined up- boys one side, girls on the other. At the end they marched off to their respective classes whilst one of the teachers played a military march on the piano.

The boys walked up to the Common once a week for games, and went to the baths for swimming lessons. The girls didn’t go swimming; they stayed behind for voice training and drill, until 1912 when the new cooking block was built.
The log book for the First World War is lost, so we know very little about the school during this time. We do know, however, that on May 3rd, 1916 “Lady Swaythling unveiled a roll of honour and wounded soldiers were entertained at the school.” Wounded soldiers were housed at Hartley College and came to the school to be entertained.

School attendance was considered more important at this time; one former pupil recalled “Nothing was allowed to deter attendance, not even the cold weather. I remember during the War the school boiler broke down and for weeks until a new one could be found we only had a few oil stoves. We had to take it in turns to use them, and the rest of us were taken out for a country run. No one was allowed to be absent.”

Armistice day- November 11th 1918 was celebrated at the school with a half-day holiday.

Education was interrupted on April 4th 1922; on the orders of the local education authority the school was closed, and stayed closed for nearly 3 months over a teachers’ pay dispute. The Headteacher, Mr Snell, attended school every day of those eleven long weeks. 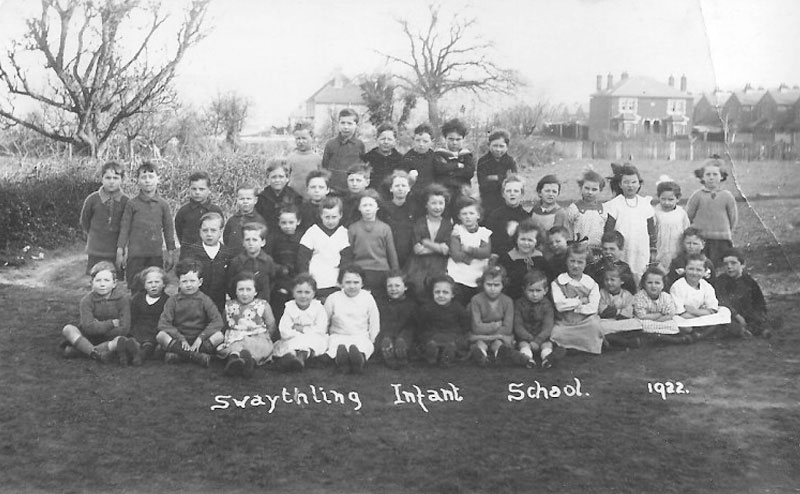 In February 1924 Mr Snell retired and was replaced by Mr R.J. Dawes. Times were still very hard by modern standards – aside from illness, the most common cause of absence was having no footwear to come to school- the attendance officers of the City discretely administered a ‘free boot fund’. There were no free school meals- a few children brought sandwiches, but more than 90% of children went home for a midday meal.Swaythling was one of the few co-educational schools in the city, and teachers from other schools were to be heard suggesting that boys from the school must be a bit ‘soft’ because they had been taught alongside girls!

In 1927 Mr Dawes retired, to be replaced by Mr C.W. Smith. By now the number on roll had risen to nearly 500 children, including 2 classes of 35 who were based in the corridor.

In 1929 electric lights were installed in the classrooms – until this point it had been gas lighting. By September 1930, the school hit a record of 694 children in 15 classes – I do not think this record will be broken in the foreseeable future. Until this point, our children had left at the age of 14 to find a job. Due to the growing population, more provision had to be found to cater for the new demand for school places.

Swaythling Senior School (later Hampton Park) opened on land adjacent to the school, and in January 1932 our school became known as ‘Swaythling Junior School’ Mr Smith retired, and Mr J.B. McGovern took up the leadership of the school.

Although there were fewer children in the new arrangement, there were still 9 classes, each with around 55 children. All sat at desks, in rows with a blackboard on an easel at the front and a map of Great Britain on one wall.

In 1933 the school tried an experiment. It closed at noon for 2 hours every day, and had an afternoon session from 2:00 until 4.15 – there were no school dinners.

At this time none of the teachers owned cars – those who lived too far away to walk either cycled or came up Burgess Road on the tram.

On July 26th 1933 the whole school had the day off to go down to the docks to see King George V and Queen Mary open the new Graving Dock. It was a beautiful summer’s day and the children from all over the City attended in huge numbers and waved Union Jack flags at the king and queen steamed in aboard the royal yacht ‘Albert and Victoria’.

In 1936 the school had an inspection which concluded that:

“This large Junior Mixed School of 650 children was opened four years ago. Besides the main building comprising of 8 classrooms, there are 4 temporary classrooms in wooden huts and another in an isolated building nearby, the whole for an average of 50 children per class. There is no assembly Hall. It will be seen that the working conditions are by no means what they should be, and it is understood that as soon as it is possible the school will be reduced in size. The school has progressed very appreciably and is now in a very healthy state but progress is hampered by the size of the classes and the lack of a Hall, free space and practical rooms.”

Unfortunately, the school had to wait another 43 years before it gained a hall! In 1937 the school was given what was probably its first audio visual aid- a gramophone player.

Also in 1937 the school took part in a PE display in the stadium to celebrate the coronation of King George VI.

In 1938, acting upon the inspector’s report (above) our school changed once again – in name and remit. It became the Infants School, with Miss E Jordan as headmistress, and the original 1898 building (which had until this point been used for the infants), was transferred to the Senior School. The infants in our school building must have felt very well accommodated- not all of the rooms were used (although there were still around 50 children in each class). All the junior children transferred to Bassett Green where 2 schools (one for the boys, one for girls) had just been completed. Miss E Jordan was the Headmistress of the Infants School.

Unfortunately events elsewhere prevented this relative comfort becoming a more permanent feature. War was declared in September 1939, and having closed for the Summer holiday in July 1939, our school didn’t reopen until 1945. Since Southampton was an obvious target in the war, plans for the evacuation of the children had been drawn up during the summer.

The children were told:

“To assemble at School at 6.30 a.m. Be in time. Bring gas masks, food for the journey, a change of clothes. Bring only one bag. If you are nor being evacuated stay away form the school.”

Many of our children were evacuated to Lymington. Children who stayed were schooled at Bassett Green Juniors (in the Methodist Hall). The army took over our school site for the duration of the war.

The school reopened on September 11th, 1945 with a new name ‘Swaythling Junior Mixed and Infant School’ and new headteacher – Miss F Morley. The children were divided into 2 infant and 5 junior classes – all with over 40 children. By July 1946 numbers were up to 334.

It was at this point that school dinners were first served. Meals arrived from a central kitchen and were served and eaten in the corridor. There was still rationing at this point, so school dinner was a very welcome addition. Food was still very scarce, and when the school broke up for Christmas in 1947 all the children received an apple – a gift from America!

The winter of 1953/54 was very cold, and the school had to close because all the toilets froze while the school waited for a new boiler and radiators. (Toilets then were out in the playground).

In November 1962, a fire broke out in one of the classrooms- by the time the fire brigade arrived, it had been put out by the caretaker. Mr Payne retired in July 1965, and was replaced by Mr Clague.

In 1966 the first Carol service outside the school was held at St. Alban’s Church in Burgess Road.

In 1967 the school became Swaythling First and Middle School – children stayed at the school until the age of 12.
The first parents’ association was formed on 6th October 1969.

In September 1970 the school became known as Swaythling Primary – the name we still use today.

“Honesty is the first chapter of the book of wisdom.” - Thomas Jefferson